… normally make me cranky. i’m not a morning person at all; i love sleeping. however, since my head is so full of cold germs that i can’t breathe through my nose, sleep is currently difficult, so i gave up trying at about 4am. at 5am i was feeling sufficiently awake & energetic that i thought it would be a good idea to go for a run (clearly, i’m not only congested but feverish & delusional as well – 5am???) so i woke up the pup & dragged him out with me. and believe it or not, i succesfully completed the last workout of this week, which (unreasonably, i initially thought) called for me to run for 20 minutes without stopping, when up until now it’s included a few minutes’ walking break.
& i did it!!! this is such a huge achievement for me, especially considering that just over a month ago i couldn’t run for one minute without feeling like i was going to die. 20 minutes!!! and at 5am, people!!! pup thought it was great as it was so early he didn’t need to be on his leash, so he was able to give me his usual motivational nudges during the run – he alternates between sneaking up behind me & trying to nip my bum, and running about at light speed in front of me while tossing disdainful glances over his furry shoulder at my feeble attempts to reach any kind of reasonable velocity.
and now it’s not even 9am, the dog has been out & exercised, as have i, and there’s a load of laundry in… maybe mornings aren’t so bad? (remind me of this when i’m fast asleep on the couch in front of afternoon talk shows later…)

& yesterday i got the yarn that i ordered for making the “morale boosters” – this may be the biggest cone of sock yarn i’ve ever seen. 500g and just over 2000 yards – that’s a lot of sock yarn! i figured better safe than sorry on the yardage (plus i’m pretty sure my legs are a little bigger than those 1940s ladies’!) & i can always make more socks out of what’s left over. i have no idea when i’m going to be able to cast on for these, but at least i have the yarn now!
(& i especially like that the yarn is “anti-tickle” – i’m not sure exactly what that means, but it’s thoughtful of them, non?) 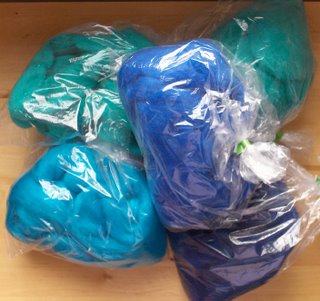 and in the same yarn order… little bags of fleecy goodness, because… i’m getting a spinning wheel!! a woman from the spinner’s guild on arran is selling me her old ashford traditional, and she’s bringing it over to the mainland next wednesday. i’ve only had one spinning lesson, but how hard can it be, right? & i definitely need another time-sucking hobby…

and it started so well
sock roundup

One Response to early mornings…